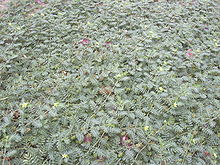 It is considered a noxious weed and an invasive species.
It has been reported that the seeds or nutlets have been used in homicidal weapons smeared with the juice of Acokanthera venenata in southern Africa.

• Terrestris has been shown to enhance sexual behavior in an animal . It appears to do so by stimulating androgen receptors in the brain.

• T. terrestris is now being promoted as a booster for the purpose of increasing sex drive. Its use for this purpose originated from a Bulgarian study conducted in the 1970s, which found effects on free testosterone and luteinizing hormone in men belonging to infertile couples.

The extract obtained from the air-dried aerial parts of this plant contains mainly steroidal glycosides, the major saponin being protodioscin (PTN). In our study on this plant product it was observed that PTN produced a moderate increase in testosterone, dihydrotestosterone and dehydroepiandrosterone sulfate levels in primates following bolus intravenous administration of the TT extract at doses of 7.5, 15 and 30 mg/kg body weight.